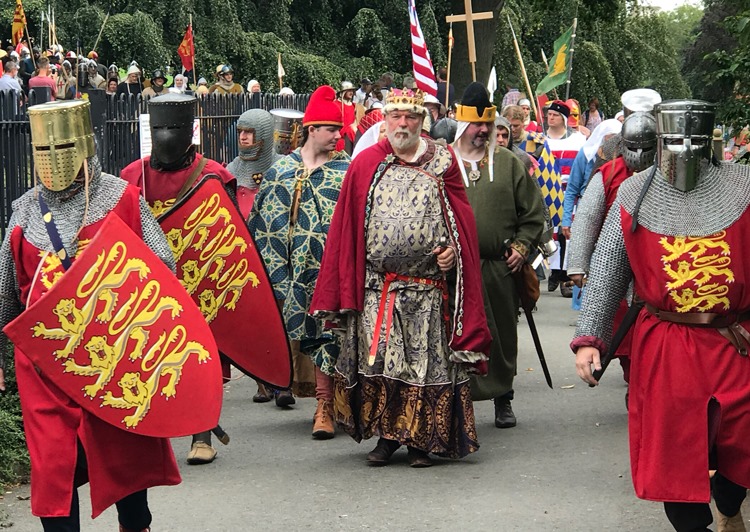 An estimated 17,000 visitors came to experience two days of medieval mayhem at the Battle of Evesham festival over the first weekend in August, plus of course the 500+ re-enactors, 12 knights on horseback, stall holders and most importantly the volunteers who helped the event run smoothly.

We are so pleased with how the Battle of Evesham went! And the good news is that it is being put forward for the Visit Worcestershire Festival of the Year 2019 awards. Finger’s crossed that the judges will recognise the historic and educational value, along with the trade that the event brought to the town – several Evesham pubs and cafés reported their best trading weekend.

The Battle of Evesham is now the largest thirteenth century re-enactment festival in England, overtaking Kenilworth this year, the largest 2-day event in Wychavon and probably the biggest thing to happen in Evesham since the original Battle in 1265.

Thanks to VECTA for supporting the festival again by covering some cost of materials for the shield project - which was featured on BBC Midlands Today. Also, to the several VECTA members who individually sponsored the event and others who volunteered to help manage the huge crowds.

A bigger, better, Battle of Evesham 2020 is now being organised for the 1st-2nd August next year with more re-enactors, more horses and more traders. We are already talking to potential partners to help fund the festival, but it’s early days and we need to raise funds throughout the year to cover the huge costs of putting on this type of event.

Please contact mick@battleofevesham.co.uk if you have any thoughts on supporting the festival as it grows.

You can leave Comment(s) as a guest, but if you want to become a member of this site...